Social scientists as well as experts and representatives from different areas of society, inter alia, politics, economy, civil society, associations and unions, science management and applied transformative research, assemble to discuss the thematic work of the foundation. The concept of the main convention was inspired by an academic congress, held at the Schader-Forum to celebrate the 25th anniversary of the foundation in 2013. The members of the Großer Konvent are at liberty to form working groups (‘dialogue cafés’, similar to world cafés) to serve as an advisory board to the foundation.

The most recent annual main convention of the foundation took place on October 29th, 2021, with the theme „Normalität als Experiment" (Normalcy as an Experiment). A short film as well as a written report serve to document the Großer Konvent (only available in German).

The upcoming Großer Konvent of the Schader-Stiftung is titled „Balancen“ (Balances) and will be held on the 4th of November 2022. 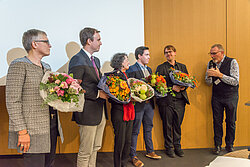 The members of the main convention elect, from among their ranks, social scientists to serve in the „Kleiner Konvent“ (small convention). The small convention, as the central advisory and appraisal body, is responsible for the preparation of the yearly convening of the main convention and the appraisals of grant applications. More generally, it serves to advise the foundation in scientific matters. The tasks are performed in close cooperation with the executive board of the foundation.

Current Members of the Kleine Konvent

As a representative of the next academic generation, for two years coopted into the Kleine Konvent:

Former Members of the Kleine Konvent: