Climate Populisms - Challenging the Future of Liberal Democracy? A Look back. 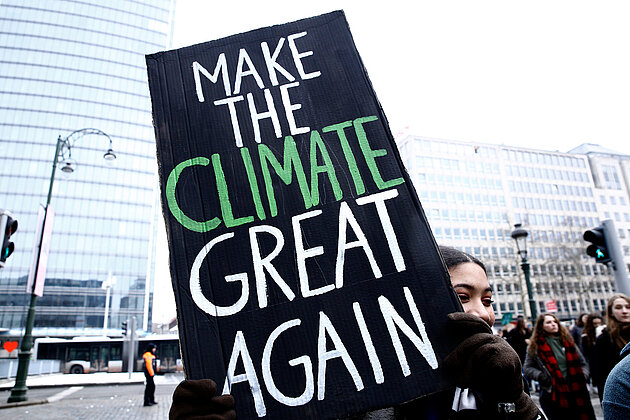 What does it mean to have populists dictating climate policy? To discuss the instrumentalization of climate change by actors who might be considered populist, the Technical University Darmstadt and the Schader-Stiftung (Schader Foundation) invited four panellists from different scientific or practical backgrounds, who are confronted with these questions in their work:

„At times it seems that almost every politician, at least those we do not like, is a populist”. It is with this quote that Jens Marquardt (Stockholm University) introduces the panel on “Climate Populisms - Challenging the Future of Liberal Democracy?”. He and Karen Lehmann (Schader Foundation) moderated the discussion. Marquardt’s introductory remark foreshadowed the tone for the following panel discussion. As it became clear over the course of the evening, the term populism is truly contested. What exactly do we mean when we talk about populism? As a bare minimum definition, Marquardt cites the Oxford English Dictionary: “a type of politics that claims to represent the opinions and wishes of ordinary people” which faces an antagonistic elite. In a lively debate regarding further specification, the panellists can agree at least upon the statement that context matters and that the different variants of populistic movements, parties and politicians defy an easy, all-consuming definition.

The discussion around climate change has turned into one of the most divisive topics politically. Famous climate change deniers like US-President Donald Trump have not only questioned its existence but have attacked collective and global efforts designed to protect the climate. Although he has not been re-elected, the panellists are sceptical if this constitutes a defeat of right-wing populism as a successful political strategy. Assistant Professor Veith Selk (Technical University Darmstadt) notes that while Trump might not be president anymore come January, the structural problems that paved the way to his election in 2016 remain. Even with Joe Biden as president, it is unlikely that the United States will be at the forefront of climate protection in the future. Professor Karin Bäckstrand (who teaches Environmental Social Science at the University of Stockholm), on the other hand, is convinced that we have experienced the peak of right-wing populism and is, therefore, optimistic regarding the new administrations’ efforts to rekindle efforts for international cooperation in the policy field. Teresa Kramarz, who is an associate professor at the University of Toronto, points out that the context in which populism is being considered is important. Populism in South America does not share the same characteristics as US-populism, especially when considering climate change. There are several countries in Latin America that have populist governments, which actually enact climate protection policies. Therefore, it is important to acknowledge that populism is not the only factor that shapes the political landscape. Underlying social, economic and political structures of a state are just as important to understand whether and how certain issues can be instrumentalized by populists.

Fridays For Future as Left-Wing Populism?

Due to the climate crisis new actors have emerged on the political scene: Fridays For Future, Extinction Rebellion as well as new faces such as Greta Thunberg. These new actors have become, in a relatively short time, influential within current and progressive environmental movements. Are these actors left-wing populists and does a populist approach bear potential for progressive politics? This was controversially discussed. One argument is that the “people – elite” dynamic in these movements is missing, which would, therefore, make them lack an essential characteristic of populism. Furthermore, in terms of self-conception, the Left understands itself predominantly as intellectuals, not as populists. If the Left were to put forward a form of populism, it would more likely be an economic one that has questions of redistribution and infrastructure at the forefront. Other panellists, though, identify a populist dynamic in the aforementioned leftist movements. The common enemy is often “Wall Street” or influential politicians that failed to protect the environment. So while one cannot strictly speak of Left-wing populism in these current movements, some populist elements are there. As is the case with many social movements, the environmental movements, at times, use populist rhetoric to rally people behind them. When it comes to the practical side, Philipp Ellett from German Association of the Automotive Industry (VDA) is wary of progressive environmental movements. He sees an increasing divergence in what is possible at the moment, e.g. in the automotive industry, and what environmentalists demand. Ellett advocates a more practical view: given the right competitive structures and policies, the industry will find ways to reduce CO2 emissions effectively on its own. It is perplexing to him that at the moment specific technologies, such as electric cars, are being subsidized when there should be incentives to invest in all sorts of advanced technologies. Looking at climate protection from a business perspective makes it clear that the prospects of competitive advantages are the best driver of innovation. Nevertheless, it is good that there is political support for a climate friendly automotive industry, but the existing strategies are still too constraining.

A Look into the Crystal Ball

Although the panel had to be organized via online streaming, the audience was engaged in discussions with each other in the online-chat and had several difficult questions for the panellists. They challenged them in their conception of populism and were especially interested in their assessment of the future of democracies and climate change. The panel members are divided on this issue: Philipp Ellett is sure that democracies are the best solution to tackle climate change while Veith Selk is sceptical. Technical innovations could be a possible way for democracies out of the climate crisis but if the protection of the planet will depend on a change of lifestyle and consumerism, Selk paints a rather bleak picture of the future. The majority of the panellists are less pessimistic about the planet’s future. Teresa Kramarz sees potential for improvements as long as global actors are willing to address the issue of fair cost distribution of climate change around the globe and Karin Bäckstrand is the most hopeful: the pandemic has shown that citizens voluntarily and quickly accepted state regulations to protect the public good. If this mind-set could be transferred to policies for mitigating climate change, there is good chance for democracies to protect the climate.

The panel discussion was organized by the Technical University of Darmstadt and the Schader-Foundation and moderated by Jens Marquardt (Stockholm University) and Karen Lehmann (Schader Foundation).

Written by Luise Spieker, Intern at the Schader Foundation.