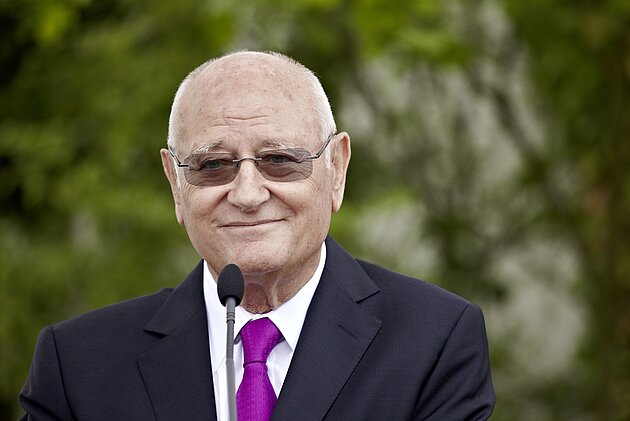 Alois M. Schader, born 1928, founded the Schader-Stiftung in 1988 as a non-profit foundation in Darmstadt, Hesse.

Alois M. Schader was a consulting civil engineer from 1953 until 1993. He strived to design each of his projects in such a way to ensure the minimal possible use of time and materials. In post-war Germany, the need for housing was immense and thus, Alois M. Schader, with his penchant of building economically, was in high demand.

Economically-efficient construction in housing was, in the mind of the founder, not just limited to the optimal use of materials. Specific aspects of building housing, in contrast to e.g. infrastructure projects, had to be taken into account as well. Therefore, he worked with an interdisciplinary team of architects and engineers and was able to realize immense savings in large scale projects for his clients, often non-profits active in the subsidized housing market.

In 2013, he was awarded the Leibniz-Medaille by the Berlin-Brandenburgische Akademie der Wissenschaften. In 2015, the city of Darmstadt honored him with the Johann-Heinrich-Merck-Ehrung. Recently, on July 16th, 2019 he was awarded the Honorary Senator of the Darmstadt University of Technology.

The Spark of an Idea

In the beginning of the 1980s, Mr. Schader noticed systemic faults in the way housing was planned and built. Even though there was a clear trend towards smaller nuclear families and thus, smaller households, his clients still commissioned housing projects with a typical 1960s family structure in mind.

Mr. Schader saw the reason for this disconnect between demand and supply in the fact that practitioners and social scientists did not work together. Social scientists knew about the upcoming change in demand for housing, such as smaller units due to smaller family sizes. Nevertheless, due to closed off spheres of influence, these findings did not become known to the practitioners until much later.

In 1988, faced with the dilemma, Alois M. Schader decided to establish a foundation with the explicit goal to support a more practice-oriented approach in the social sciences and, at the same time, increase the esteem of social sciences and their findings by practitioners. Due to his own professional experience, he saw the pressing need for more cooperation between social scientists and practitioners. In consultation with his family, Mr. Schader made the choice to donate his private assets to the foundation.

Schader-Forum for the Social Sciences

It is especially important to the Schader-Stiftung, and to Mr. Schader personally, to increase the prestige of practice-oriented research in social sciences. Therefore, each year, the foundation bestows the Schader-Award upon a social scientist, who has particularly earned merit in this respect. The award is endowed with 15.000 Euro.